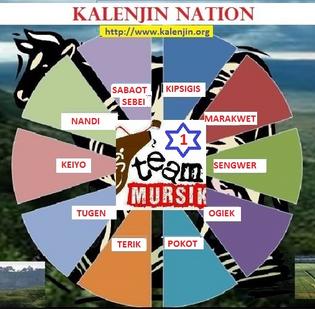 The Kalenjin are a Nilotic ethnic group whose most population currently inhabits the Rift Valley region and a smaller population live around Mt. Elgon both in Kenya and Uganda. The population in Kenya is estimated at around 5 million as per the Kenyan 2009 census and approximately 300,000 live in Uganda. Kalenjins are an ethnic group of ten culturally and linguistically related dialects or “sub-tribes” namely: Nandi, Kipsigis,Tugen, Keiyo, Sengwer, Marakwet, Pokot (sometimes called the Suk), Sabaot (who live in the Mount Elgon region, overlapping the Kenya/Uganda border), Ogiek, and the Terik.

​​​​The word "Kalenjin" translates roughly as “I tell you.” The name has played a crucial role in the construction of this relatively new ethnic identity among formerly independent, but culturally and linguistically similar tribes. The origin of the name Kalenjin and the Kalenjin ethnic identity can be traced to the 1940s. It represents a clear desire to draw political strength from greater numbers.

Beginning in the 1940s, individuals from these groups who were going off to fight in World War II (1939–45) used the term kaleorkole (the process of scarring the breast or the arm of a warrior who had killed an enemy in battle) to refer to themselves. During wartime radio broadcasts, an announcer, John Chemallan, used the phrase kalenjok (“I tell you,” plural). Later, individuals from these groups who were attending Alliance High School formed a “Kalenjin” club. Fourteen in number, they constituted a distinct minority in this prestigious school in an area dominated by another tribe, the Gikuyu. The Kalenjin wanted an outward manifestation of identity and solidarity to distinguish them from the Gikuyu. These young high school students formed what would become the future Kalenjin elite. Kalenjin identity was consolidated with the founding of a Kalenjin Union in Eldoret in 1948, and the publication of a monthly magazine called Kalenjin in the 1950s.

The Kalenjin movement was not simply the development of a people’s identity. The British colonial government supported the Kalenjin movement and sponsored the kalenjin monthly magazine out of a desire to foster anti-Gikuyu sentiments during the Mau Mau emergency. The Mau Mau movement was a mostly Gikuyu-led revolt against British colonialism that provoked an official state of emergency lasting from October 1952 to January 1960.
Gikuyu conflicts both with the British and with non-Gikuyu tribes (including the Kalenjin) factored in the creation of Kalenjin solidarity and unity.

Traditionally, the basic unit of political organization among the Kalenjin was the koretor parish. This was a collection of twenty to one hundred scattered homesteads. It was administered by a council of adult males known collectively as the kokwet and was led by a spokesman called poiyot ap kokwet. This spokesman was someone recognized for his speaking abilities, knowledge of tribal laws, forceful personality, wealth, and social position. At public proceedings, although the poiyot ap kokwet was the first to speak, all of the elders were given the opportunity to state their opinions. Rather than making decisions himself, the poiyot ap kokwet expressed the group’s opinion, always phrased in terms of a group decision.

Today, this system has been replaced with a system imposed by the British colonial government. Several villages form a sublocation, which is part of a location. Several locations form a division, divisions form districts, and districts are included in provinces. Each village has a village elder who settles minor disputes and handles routine affairs. Assistant chiefs, chiefs, sub county commissioner, county commissioners, and regional commissioners rule each of the other levels of administration, the latter directly under the president’s authority.